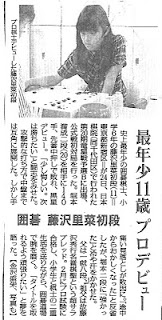 Dear Friends... sharing an article that was published in a Japanese news paper Rafu Shimpo (June 30, 2010 Page 5). Enjoy
Youngest Professional Debut at the Age of 11
One-dan Rina Fujisawa debuting professionally (caption for photo)
Go: One-dan Rina Fujisawa 藤沢里菜
The youngest age ever for a professional go player, Rina Fujisawa One-dan (11 years old, from Shinjuku Ward, Tokyo) who is in the sixth grade of elementary school had her first official game on the 24th, competing in the 20th Annual Ryusei Tournament 第20期竜星戦Preliminary Group B. She debuted with a loss against Michinari Horimoto 2 dan (堀本満成 20 years old), resigning with the black stones after 140 moves. With fighting spirit, she said, “I am a bit disappointed. I would like to win the next game.”
In her aggressive style, the game was even after developing into the middle game. But a costly oversight became the reason she lost. She said with regret, “It turned into a worse position about half-way through”, but she gave Horimoto Two-dan the cold sweats, who said, “She is very strong.”
Her father is Kazunari (藤沢一就 八段)Eight-dan, and her grandfather is the late “Meiyo Kisei (名誉棋聖)” (holder of six back to back top go titles in ) Hideyuki Fujisawa (藤沢秀行)making her a super thoroughbred. She passed the test to be a professional in February, and while living the double life of a grade school student and go professional, she is honing her skills at the go dojo. Talking about her dream she said “I would like to do my best to win a (championship) title”.
Article and photo by Moriei Kanazawa
Translated by Show Kitagami, Reiyukai America

We welcome beginners and players of all strength. Beginner lessons are free! We have players of all ages (Our youngest player is only 7 year's old!!!) We meet every Wednesdays, from 6 to 10pm