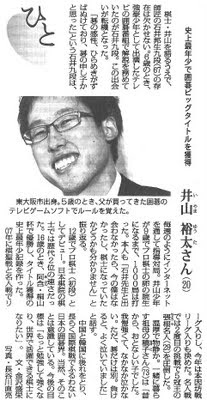 When talking about [Japanese] Professional Go player Iyama, the 67 year old 9-dan teacher Kunio Ishii must also be mentioned. When Iyama was six, 9-dan Ishii was working as a commentator on the Go television program Iyama appeared on as an outstanding juvenile player. This chance meeting became a turning point.

9-dan Ishii who said, “His sensibility and spark in Go is exceptional and I thought he was born to play Go!”, coaches by playing him on the internet most every week. He played over a thousand games with him until Iyama was nine years old and ready to become an Insei (candidate for a professional go player.) Iyama himself looks back saying, “If I had not encountered my teacher Mr. Ishii, the person I am now would not exist and I would not know if I would have become a professional Go player”.

Iyama debuted as a professional Go player (1-dan) at 12 years of age. It is the second youngest age in the history of the Nihon Ki-in, or the Japan Go Association. At 16, he won the Agon-Kiriyama Cup, and became the youngest player ever to win the title.

Iyama is gentle and mild-mannered. Grandmother Sekiko of age 73 who lives with him says, “He was always a quiet child. He is enduring and does not cry often. But it is different when it comes to go. He cried often when he lost a game.”

Japanese Go has fallen behind and and has long struggled in the international Go championships. Iyama is, of course, aware of this. From here on out he aims to “study hard and become a world-class go player.”

We welcome beginners and players of all strength. Beginner lessons are free! We have players of all ages (Our youngest player is only 7 year's old!!!) We meet every Wednesdays, from 6 to 10pm