Joe Walters, Yu Go Club founder and current secretary, worked with this year's Anime LA to set up a session to teach people at the convention who were interested in the game. The first session was Saturday morning from 8am to 10am. We had around 20 people show up to learn about Go. We handed out cardboard 9x9 sets purchased by Anime LA, and information about clubs in and around Los Angeles, as well as information about Yu Go Club. 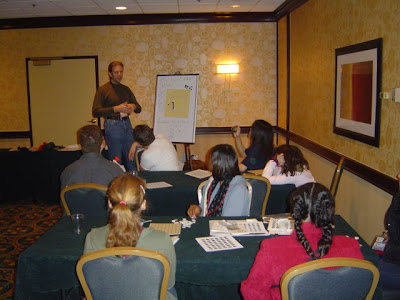 Alf gives a lecture about life and death
The teaching session went very well. People were very interested in learning to play Go, and the Anime LA organizer who joined us, Heidi, told us that she's read a lot about the game, but this is the first time she's gotten a chance to play. I hope that some of the people who learned to play will continue playing long after Anime LA 2008.

After the Saturday session, we had a 24-hour beginner's tournament. All games were even with 5.5 komi, with a prize for the person with the most wins. Unfortunately, as we discovered on Sunday morning, people had a hard time finding each other to play a game. We'll need to make some changes next year in order to get the tournament to work better.

It was really great to see how much interest there is in Go at Anime LA! I think if we schedule an activity next year for more advanced players, and possibly tie in the Go activities with Hikaru No Go somehow, we can build a larger Go event at Anime LA in the future. 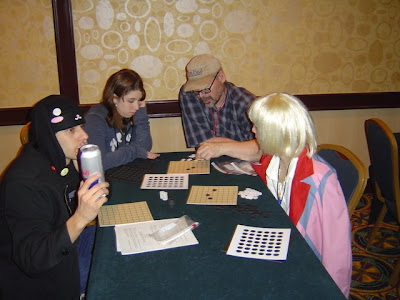 Terry McIntyre (back right) teaches some new students.
Many thanks to Joe Walters for organizing the event, and also to Andy Okun, Terry McIntyre and Samantha Davis of the Santa Monica Go Club for helping with organization and teaching.

Thanks to Samantha going into the hall and "hawking" the news about the Go event, I think we had about 40 people overall that came into the room to see what was going on.
After our two hour session she and Terry helped other passers-bye get introduced to the game also.
I reported 40 participants to the EJournal, so if anyone gets confused between was it 20 or 40, now you know.
A real big thank you to Alf for doing the intro. Because of his enthusiasm about teaching young people at the Pasadena Library, he was the perfect choice for this introduction.
I'd also like to thank Terry. He has always been the first to volunteer for any Go projects and his patience in teaching is worthy of respect.

We welcome beginners and players of all strength. Beginner lessons are free! We have players of all ages (Our youngest player is only 7 year's old!!!)